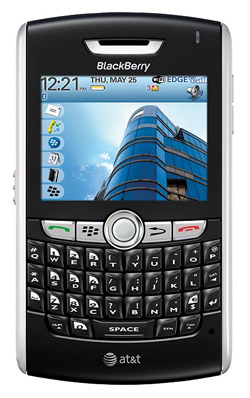 It looks like Research In Motion’s GPS and WiFi-toting BlackBerry 8820 is finally making it’s debut on AT&T’s nationwide network (well, Amazon’s offering notwithstanding) – a bit behind our expected schedule. With a $299 price-tag, AT&T will begin offering users the chance to get in on the GPS and WiFi goodness that is RIM’s BlackBery 8820.

Sorry, BlackBerry 8800 owners, but with today’s announcement, your RIM handheld is now something us industry-folk like to call “obsolete.” It’s a shame, we know – but that’s how it goes with mobile phones. One day you’re on top of the world, the next your last week’s news.

The BlackBerry 8820 will be rocking the 8800’s business-centric camera-less exterior, EDGE, PTT (push-to-talk) functionality, microSD card slot, WiFi a/b/g, and of course the integrated GPS module. The question remains, will AT&T be crippling the GPS functionality on the 8820?

Update: the BlackBerry 8820 will go on sale tommorrow.

Following on yesterday's official announcement that the UK iPhone will be the responsibility of UK wireless carrier O2, Apple today...