So it looks like Verizon Wireless is really trying to heat things up. They must still be feeling rather bitter about not jumping on the iPhone bandwagon when they had their chance. With the iPhone still selling like Twinkies at a Fat Camp, and AT&T slated to launch some other cool devices, we can imagine that Verizon is scrambling to keep up. 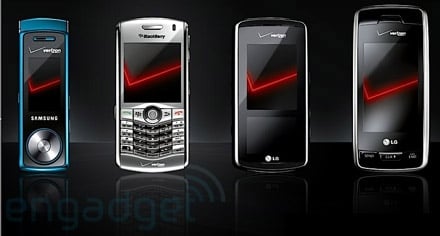 In order from left to right, Verizon Wireless will be launching the Samsung Juke, BlackBerry Pearl, LG VX8800 Venus and LG VX10000 Voyager all at the same time, in a couple of weeks. The Samsung Juke is the Samsung U470 swiveling musicphone that we showed you earlier. We’re expecting 2GB of storage and a 1.3 megapixel camera. The new BlackBerry Pearl will be sporting a 2 megapixel camera, A2DP Bluetooth and a 3.5mm headphone jack. LG will be throwing down with the LG VX8800 Venus and LG VX10000 Voyager. The LG Venus is a dual-screen slider with haptic feedback (vibrating touchscreen), 2 megapixel camera, and A2DP Bluetooth. Bigger brother LG Voyager comes packing the big guns – like a huge external touchscreen and internal display with a vertical clamshell setup that reveals a full QWERTY keyboard. As the successor to Verizon’s LG VX9900, the LG Voyager will sport a full-HTML browser and stereo speakers.

For Verizon Wireless’s sake, we hope their new lineup does well. If the success of the LG VX9900 with the younger demographic holds up for the LG VX10000 Voyager, Verizon will have at least one hit on their hands. Not to mention the Motorola Z6tv that’s slated to launch around the same time. Although, we’d rather sign a new contract and give AT&T our money for the AT&T Tilt.

Remember that Motorola Z6tv VCAST TV slider-phone that recently passed through the FCC? Well, it looks like Verizon Wireless is...