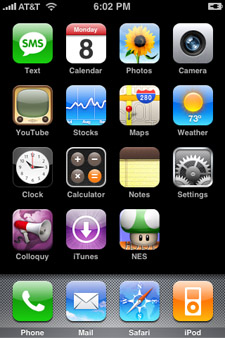 That’s right! The iPhone v1.1.1 jailbreak hack has gone from iPhone-dream to iPhone-reality. Just days ago we reported on initial successes in accessing the iPhone’s file-system, and now a fully working jailbreak solution is imminent. The new jailbreak solution will run most third-party applications and will even work with the Nullriver Installer.app that made native application installation such a breeze in v1.0.2.

iPhone Atlas is reporting that a simplified, end-user jailbreak could be available as soon as today. For now, Engadget‘s Ryan Block has confirmed that the iPhone Dev Team’s iPhone v1.1.1 jailbreak beta is live and functional. The current iPhone v1.1.1 jailbreak works by exploiting a security hole in iPhone Safari by which a corrupt TIFF image allows root access. And, like we said before, a simple update from Apple will most assuredly close this security hole – rendering the current jailbreak useless.

Unfortunately, SummerBoard will not work with the new jailbreak method – Apple changed the way the iPhone deals with the SpringBoard homescreen icon manager. But, that’s not all bad. Apple actually built-in a multi-page homescreen feature that will be enabled with the v1.1.1 jailbreak – so there isn’t even a real need for SummerBoard anyway. Once Installer.app is optimized for the v1.1.1 jailbreak, we’ll be making the jump to the new firmware. WiFi iTunes Music Store, here we come!

Unless Apple offers something truly unique and worthy of another update, the iPhone v1.1.1 may be the end of the line for third-party application-loving iPhone users. Better kick up your game, Apple. Like we said before, we’re not updating for anything less than iChat or video capture.

Chances are you use Firefox, have a few extensions installed and if you're really hardcore you probably have a Firefox...