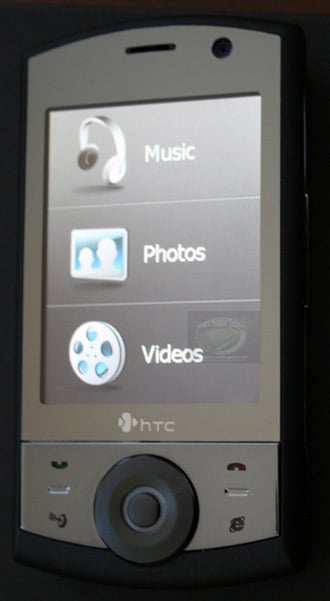 Another touch-based handset in HTC’s lineup? You had better believe it. Touch-based mobiles are the hotness these days, and HTC’s getting in while the getting’s good. Their the newest addition to Touch lineup of TouchFLO-enabled smartphones is the HTC Polaris, which will henceforth be known as the HTC P3650 Touch Cruise – and will sport an updated TouchFLO interface with rotate and zoom support.

Thanks to the work of CoolSmartPhone, we have some newly leaked specs of the HTC Touch Cruise – and they’re a nice surprise. The HTC Polaris P3650 Touch Cruise (gotta love them long names from HTC), will be rocking out with a quad-band GSM (850/900/1800/1900Mhz)  radio and a tri-band UMTS (850/1900/2100Mhz) radio that should put HSPA (that’s HSDPA and HSUPA) networks to good use – even in the US. The previously leaked spec sheet only made provisions for a single-band UMTS radio, so we’re glad to see that  the HTC Polaris Touch Cruise will be surfing US networks with Yankee-friendly 3G frequencies. Unfortunately, our hopes for a 3.5-inch VGA display have been dashed – replaced by a 2.8-inch, 320 x 240 QVGA display. But, the 3-megapixel camera (with front-facing video-call camera), WiFi, Bluetooth, and a microSD slot are still on par with our expectations, so no surprise there.

The HTC Touch Cruise hasn’t been finalized yet, so there’s still time to get that screen bumped up to VGA-status, but don’t hold your breath. We’re expecting the handset to make it to production with a 4-key and d-pad layout under the screen. Drooling yet? Stay cool. The HTC Touch Cruise is slated for a late November launch, which is right around the corner. Trust us, this thing will launch before you can say, “Damn I want one!”

Who wants a super-thin GPS-equipped smartphone running Windows Mobile 6.0 Professional? We thought so. Well, for those of you squirming...