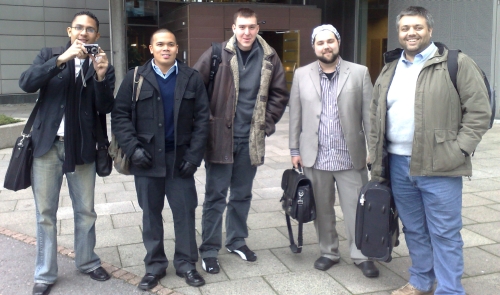 There is a fine line between happiness and pure unadulterated ecstasy. Nokia helped 5 bloggers from all over the world cross that chasm, with style, at the N82 product launch event in Finland. From left to right we have Devin, Mark, myself, Jeremiah and Jay. We’re standing in front of Nokia Headquarters in Espoo about to walk through the entrance to the FG building where we would be spending nearly an entire day with people from Multimedia and Corporate Communications. 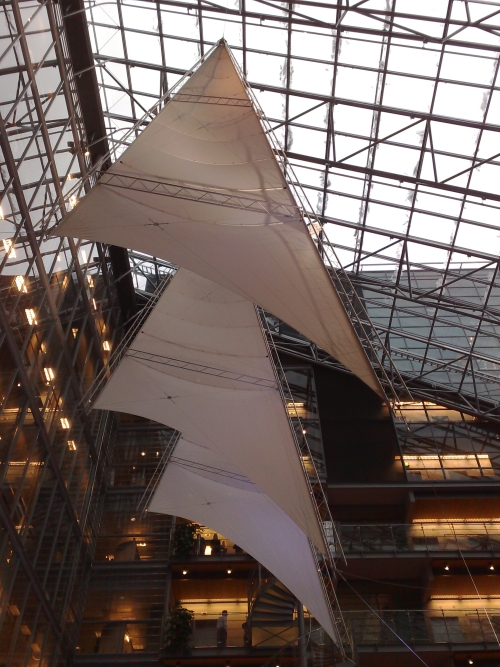 I’ve already written about my first trip to Nokia House this summer and since then I’ve visited many times, but to be there with these 4 other bloggers who share a similar passion as I do and watch them nearly break their necks as they stared in awe at the magnificent steel and glass ceiling was absolutely epic. We were given a brief tour of the building and then sat down for lunch where we were interviewed by WOM World one by one to gauge initial reactions. To say we were mesmerized and speechless would be an understatement, but the realization that we were indeed roaming the belly of a multibillion dollar corporation didn’t set in until it was time to move into the Winnipeg meeting room on the 8th floor to get debriefed on the Nokia N82. It was noon and therefore the entire building flooded into the two cafeterias that we had to walk past in order to get access to the elevators. I remember Devin turning around and telling me “I’ve never seen this many Nokia employees.” It was then that it dawned on our party of 5 that we were inside the machine. These people are Nokia, not the devices, not the cute marketing slogans, not the 5 letter blue logo, but it was these guys who are the cogs in the vehicle that drive us to blog and tell people about the things we care about and love. 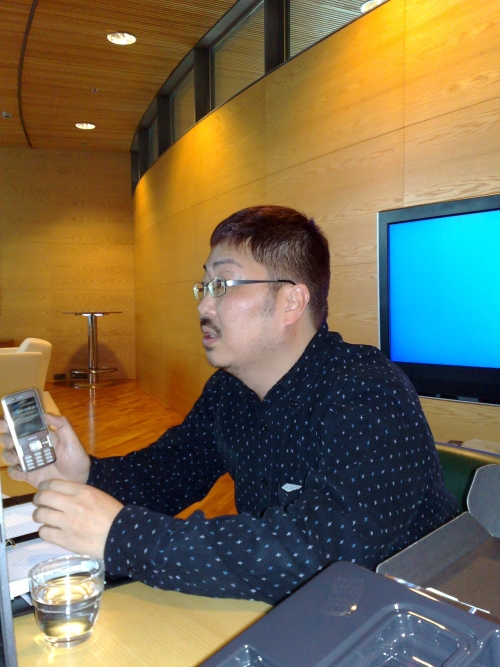 We walked inside what looked to be a fairly typical meeting room and then things got interesting. One by one we were each given a retail APAC region Nokia N82 and being the gadget fetishists we were immediately started playing with them. The N82 product manager from Tokyo sat at the head of our table and our Q&A session began, but it was clearly evident that we have zero self restraint and had difficulty putting down our devices. The ice had to be broken so I asked the first question: “How long, from conceptual drawings to mass production, did it take the N82 to be created?” Before Tomo could even answer, the corporate communications woman interjected and said that was confidential information. This is where the agony sets in. Tomo was an awesome guy, he had a lot to tell us, but before he could answer our questions he had to turn his head to the right and get approval from the communications person who was fiddling with what was obviously a 20 page talking points document. Most of our questions were answered, quite clearly actually (video), but there was a hint of discomfort in the air when Tomo had to ask permission to answer one of us. 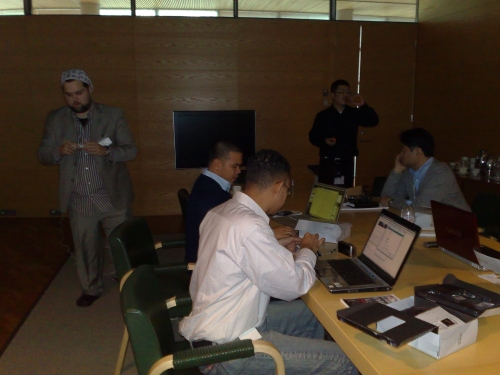 Public Relations is tricky, but I’m not going to get upset at what happened. I understand Nokia has the 5th most valuable brand in the world and that asset needs to be protected. What I don’t understand however is why they couldn’t just let Tomo be himself and talk to us like we (bloggers) talk amongst ourselves? Suddenly the corporate communications people had to go to a meeting; after they left we had just a few minutes to be alone with Tomo and ask questions without anyone filtering him. Jimmy Wales, the founder of Wikipedia, said: “practice the philosophy of making it easy to correct mistakes, rather than making it difficult to make them.” I couldn’t agree more with those words. I asked Tomo, again, if he could tell us the codename of the N82 and the story behind it, he said he couldn’t, but by accident the codename slipped. He apologized and asked us nicely if we could keep that to ourselves. It has been over 48 hours and we kept up our end of the bargain and that is because Tomo was talking to us like he was one of our friends. He actually said “I like X product more than Y product because of A, B and C,” something a Nokia employee would never tell a journalist.

Two guys who are responsible for the Sports Tracker application came inside, but instead of sitting at our long table they went off to the couches on the side to take questions. That was a little unnerving because group discussion always outweighs one on one when it comes to feedback. Mark would say something I wasn’t even thinking about and that in itself sparks a question out of me that would have never even been asked which would then inspire Jay. It was approaching 14:00 and that meant we would watch the countdown timer tick to 0 and see the virtual event live on what was a large HDTV on wheels. This is where all hell broke loose. 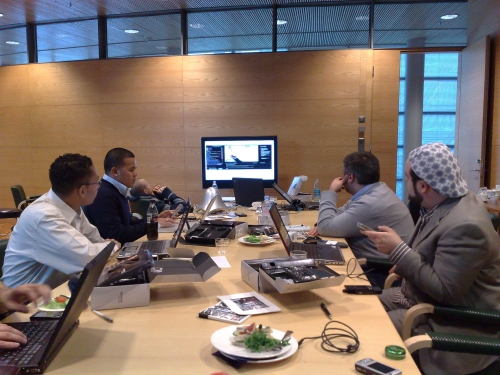 Nokia’s IT security policies were so strict that the content streaming out of the server room inside the building couldn’t be accessed by anyone who happened to be inside the building. Long story short, I’ve never seen Finnish people move so fast to get things up and running. It happened eventually and they apologized profusely, but like I said earlier, with the N82’s in our hands we didn’t even notice the technical snafu. It was a blip on our radar. After watching all the videos, which you can check out youself here, it was time for the virtual Q&A session that was open to the world with the product managers and us answering questions. Brownie points for the online marketing team using Meebo Rooms to pull this off, it was a smashing success. We had a few people spamming the chatroom with iPhone propaganda and plugging their own websites, but they were quickly dealt with. 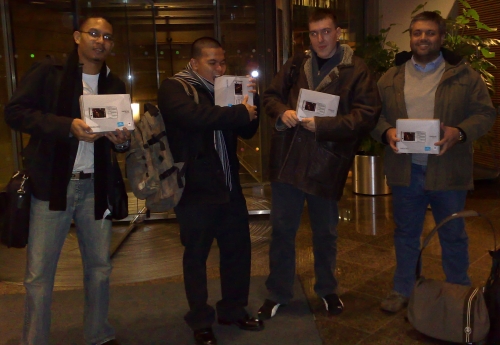 The day was coming to a close and that meant a cold dark Finnish winter was about to kick into high gear. It was unclear if we would be keeping the N82’s or not so we were all looking with anticipation, elevated pulses and cute puppy eyes at the Nokia people to get an answer. We were told our devices would be ours to trial for 1 to 2 months at which point WOM World would collect and redistribute them to other bloggers for review. Joy, high fives, tears of happiness (ok maybe not), we are the few people in the world to have this exclusive device. Next we were escorted out of the building, said our goodbyes and took a cab back to the hotel where four of us, Jay had to leave earlier, feasted on reindeer. After dinner we had the opportunity to reflect on that day’s event and it was unanimous, it was probably the culmination of our blogging careers to experience what just happened. 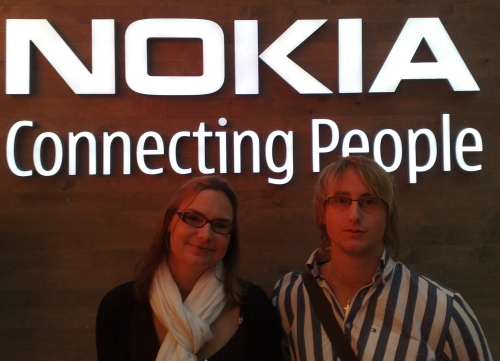 I honestly can’t wait to read what the 4 other bloggers had to say because it was their first time inside Nokia. As for me, it was a time to see the friends I’ve made since coming to Finland over 4 months ago. I was absolutely ecstatic to be sitting right next to the N82 product manager and asking him things, albeit on a tight schedule. Connecting People is not only the slogan of the company, it is their philosophy.

Thanks to WOM World, not only for the device, but for making friendships I have with people online into memories experienced offline.

Preview of my N82 review: If I could have any phone in the world (forget about Japan for a minute) it would be this one.

Are you tired of hearing about the Nokia N82 yet? No? We thought not. As Stefan pointed out, the Nokia...