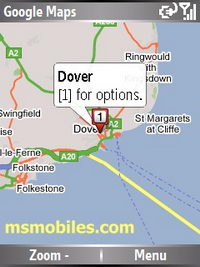 Following the release of the native Symbian S60 application, Google decided it’s time to also upgrade its Windows Mobile-based Maps application. It’s no longer Java-midlet, rather it’s a native app – meaning it should run much faster. And even though I haven’t been able to try it out myself, the new Google Maps for Windows Mobile (version 1.7.1.4) reportedly features several updates including the functional route mapping and clearly marked turn-points on every loaded map. It’s a nice addition from Google, although I still don’t understand why they don’t add voice navigation… Do I smell a premium version, or what?

DataViz has announced a new version of its popular mobile office suite, Documents To Go, for Palm OS based devices....