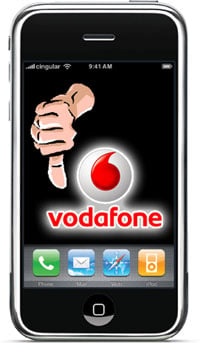 You may like or not, but Apple’s iPhone is THE more disruptive device like ever. Now, we have Vodafone — the same company that fights iPhone defection by taking customer service offline — obtaining a Court order that required rival T-Mobile Germany to sell iPhone without a service plan. And while we do agree that’s a good news for German consumers who like the Apple’s handset, somehow if that’s the way Jobs&Co wants to go – you can’t blame them. Apple was never really open about its platforms, but always managed to get its place under the Sun. Kudos to them for that. Also, it’s important to note that this could lead to complete halt of iPhone sales in Germany…

Back to Vodafone. Don’t you guys have F700 and N95 8GB? I find those two devices to be quite appealing. Why oh why do you want to take this kind of (stupid) action? According to the Big Red it’s the fear that other handset makers may follow Apple’s example and begin tying their handsets to specific providers (like the Samsung F700, which is exclusive to Vodafone?), further shredding the German wireless market. Yeah, it’s the benefit of the German mobile phone users you care about, not shareholders. C’mon folks, it makes me sick. You could have an iPhone deal, but you decided to go the other route. What’s the problem now?

Anyway, T-Mobile’s parent company — Deutsche Telekom — has confirmed the ruling, and is working to overturn it in an appeals processes.

We expected the Samsung U900 FlipShot and its 3 megapixel and swiveling display to hit Verizon Wireless's network last week,...