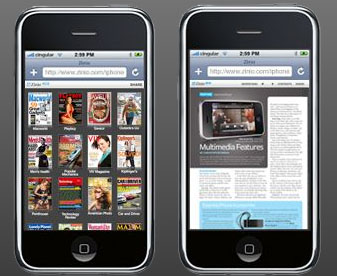 Want free magazines? Sure you do. In case you have an iPhone or an iPod touch, you can now access the Zinio’s iPhone-dedicated website and read some of the most popular magazines on your beloved device, while on-the-go. At the moment, Zinio is providing iPhone and iPod Touch users with a free access to such magazines as Car & Driver, Men’s Health, Macworld, Woman’s Day and Kiplinger’s — i.e. they’ve managed to make quite a selection, assuring that every single user of the Apple’s handset (or iPod touch) will find something interesting for himself/herself.

Without further ado, here’s the link that leads to the free magazines. Alternatively, you may want to check out the full Zinio’s release after the jump…

PRESS RELEASE – Zinio LLC, the leading digital publishing and distribution platform for magazines and books, has introduced a Zinio Mobile Newsstand for the iPhone and iPod Touch. Developed by Zinio’s research and development group, Zinio Labs, the Mobile Newsstand offers mobile users a new way to read a number of favorite magazines, while at the same time offering publishers a new way to reach mobile audiences.

“The iPhone is an amazing product that’s helping to take compelling content, like magazines, mobile. With its advanced touch screen technology and crisp viewing experience, Apple’s newest devices were natural for the launch of the Zinio Mobile Newsstand,” said Rich Maggiotto, CEO. “Users will benefit from having their magazines in a high-fidelity, portable format that can be viewed practically anywhere.”

Zinio will initially offer free digital editions of top-selling monthly magazines targeted to the iPhone user. The Zinio Labs version will include publications representing a wide range of interest areas. Some of the domestic and international editions available from Zinio include:

Users do not need a subscription with Zinio to gain access. Anyone with an iPhone or iPod Touch should visit http://www.zinio.com/iphone where they can view a selection of Zinio’s digital magazines, flick to scroll favorite covers, or tap any issue to start reading. Magazines available in the Zinio Mobile Newsstand are exact replications of the print version with razor sharp display plus added interactivity and share capabilities.

Another upside-down iPhone – this time on TV

Here's another iPhone that's had its butt-end confused for its top-end. Aren't there people getting paid to make sure stupid...