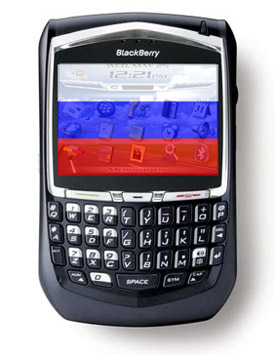 Welcome to the age of the CrackBerry, Russia. We’re glad to hear that you’re finally getting with the times and letting RIM bring their heralded BlackBerry lineup within your borders, starting in 2008. Hey, you’ve caught up to Communist China!

With the Russian security agency’s (FSB) approval to let Russian wireless operators MTS and Vimpelcom carry the BlackBerry phones from RIM, carrier-branded BlackBerry handsets should be making their way into email-addicted Russian hands in Q1 2008. BlackBerries have been in use on MTS’s Ukraine network since October, but those handsets used foreign SIM cards as roaming handsets. This announcement marks the first legitimate entry of the BlackBerry into Russian wireless networks.  Vimpelcom has been greenlighted to sell 1,050 BlackBerry 8700 smartphones as soon as the handsets pass certification tests.

MTS and Vimpelcom have a one-year sales window, so Russian could go back to the pre-BlackBerry dark ages in 2009 – although, we’re going to put our money on a long-lived Russian BlackBerry market.

Samsung's going after the Asian cash-cow that is the Indian wireless market by releasing the CDMA Samsung Max as an...