Users of the Apple’s handset surf the web more than any other device owners. According to ComputerWorld, iPhone’s Safari has grabbed a 0.09% share, which might not seem like much but when you put it in perspective – it actually is. 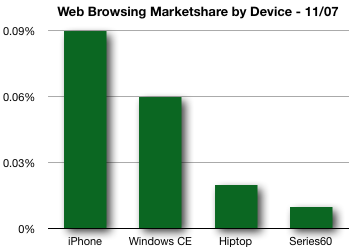 Apparently, web browsing on any Windows Mobile powered device accounts for only 0.06%, while web usage on Danger OS (Sidekick/Hiptop) and Symbian S60 based devices holds 0.02 and 0.01 percent respectively.

As far as I’ve understood, these are the numbers for the U.S. as I guess Nokia certainly holds a more significant share in Europe. Still, kudos to Apple…

Although I don't own a Windows Mobile device, I do admire Vito Technology's efforts to add some of that "iPhone...