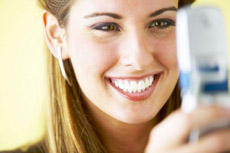 What comes to mind when you think of super-geeky gadgets like, oh, mobile phones and DAPs (Digital Audio Players)? You picture a youngish dude sitting at his computer workstation typing away at his keyboard, right? Well, no more. It seems, in the UK at least, that woman have finally overtaken men in their last bastion of shopping superiority. UK department store John Lewis is expecting this year’s gadget shopping to be dominated by the female set, according to spokesperson Helen Keppel Compton.

As holiday shopping is expected to hit its peak (Black Friday notwithstanding), John Lewis is expecting 50-60% of all geeky-cool shopping to be done by women. For the first time, women are embracing technology as less geeky and more “fun.” Women rule…the shopping world.

Still, we have a feeling that most of the more “hardcore” gadget purchases will be handled by men. Did that sound a little chauvinistic?

Motorola looking towards a positive Q4 2007

Sometimes a changing of the guard is exactly what the corporate-doctor ordered. With the recent announcement that CEO Ed Zander...