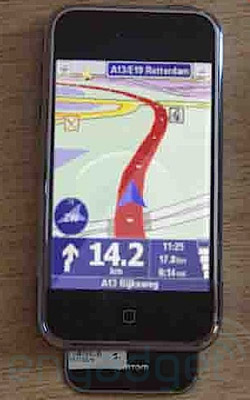 We can’t tell you how much we love grainy spy-shots and questionable rumors. Like this one, for example. The image you see to the right shows what looks to be a TomTom-made GPS module plugged in to the bottom of an iPhone, with GPS navigation prompts displayed on the screen.

With the iPhone SDK slated for a February release and widely rumored to already be available to a select few developers, it’s entirely feasible that TomTom has been “tap-tapped” to bring GPS functionality to the iPhone by way of an official “Made for iPhone” accessory. On the flip-side, we’ve seen many a rumor come and go – which is to say, completely fail to materialize.

For what it’s worth, we don’t see any reason why Apple wouldn’t want to offer GPS navigation on the iPhone, and TomTom would be a logical choice for Apple. That is, it would be a perfect stop-gap until the 3G iPhone with GPS launches – right?

Update:
It’s likely a fake. The barcode on the botton of the module is a favorite of a well-known designer of iPhone/iPod fakes.