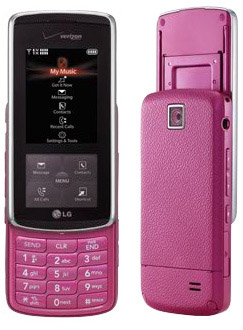 If we had our way, everything we owned would be colored pink. Laptops, mobile phones, shoes, underwear, glasses, pets – they’d all be sportin’ some girly shade of pink. What? You got a problem with that?

Well if you do, then you won’t be happy to hear that Verizon Wireless has gone official with the Pink-hued version of the LG Venus. As we expected, Verizon has made good on their promise to bring a more female-friendly version of the new LG Venus to the pink-loving masses. The internals are exactly the same as it’s darker-colored sibling, and Verizon is asking the same $200 (after $50 rebate and 2-year contract) that the Black LG Venus commands. So, if you’ve been holding out for a Pink LG Venus to match your shoes and your doggie, then here’s your chance!

Oh, and we hear it makes a great gift for that special someone, or maybe yourself – it’s okay, we don’t judge.