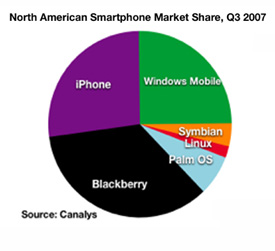 We love quoting CEO’s. They’re good at shooting off at the mouth and having to later eat those words. Take, for example, Microsoft CEO Steve Ballmer’s statement about the iPhone back in April. Mr. Balls-mer said that “There’s no chance that the iPhone is going to get any significant market share. No chance.”

Well, guess what? The Apple iPhone took out the entirety of all Windows Mobile devices’ market share in Q3 2007. With iPhone market-share continuing to grow, Steve Ballmer is likely eating those bitter words. But, we’re sure he doesn’t mind it all that much – those tens of millions of dollars in yearly dessert-salary are a good way to wash that bitter taste off of any palette.

NPD is reporting that the iPhone snatched up a remarkable 27% of the US smartphone market in Q3 2007. The findings are in line with recent reports that the mobile-web was dominated by surfers using the iPhone’s unrivaled Safari browser.

Hey, Microsoft investors, you sure you still want to be feeding this guy all those fatty C-notes? He looks like he’s had more than his fair share.

Here’s a video of Steve Ballmer’s well-fed (those C-notes are fattening, remember?) self

[Via: MacDailyNews]Image courtesy of Roughly Drafted.

Unlocked iPhones in Germany and France still locked, kind of

It turns out that those "unlocked" iPhones from France's Orange and Germany's short-lived unlocked iPhone offering from T-Mobile weren't really...