Sometimes I just love the folks behind the FCC. Thanks to them, we find out about the upcoming devices way before handset makers want us to. That being said, we’ve recently spotted what seems like two powerful Toshiba-made smartphones called Portege G910 & Portege G920. And while it’s not that clear what’s the difference between the two devices, we can say that both of them are made to appeal to the high-end smartphone users. As a matter of fact, the image above reminds us on both Nokia Communicator and Windows Mobile powered QTEK devices. 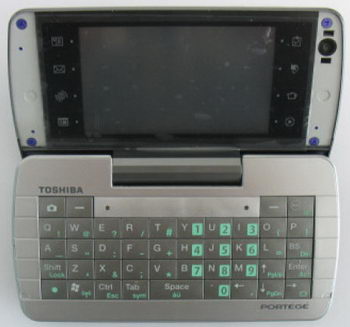 As for the specs, we see a tri-band GSM radio, WCDMA, Bluetooth, WiFi, USB 2.0, two cameras (main at least 2 MP with flash light), large 3″ display (possibly a touchscreen), microSD slot and the powerful 1320 mAh Li-ion battery. As for the OS, Toshiba has used Windows Mobile on many of their devices, so I guess they’ll continue to do so with these two phones as well.

Personally I don’t like the way it looks at this stage. But, it’s also important to know the final product may be slightly changed in terms of design and hopefully the color choice. We’ll wait and see…

Again, we see great phones hitting the uber-advanced Japanese mobile phones market. One device that recently caught our eyes is...