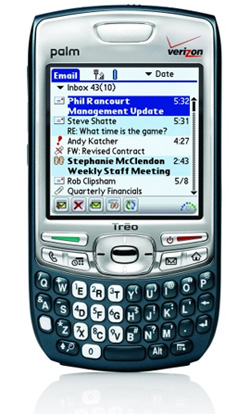 Faithful Verizon subscribers, rejoice! Following on recent certification test-approvals, the long-awaited Palm Treo 755p has finally hit the nation’s largest CDMA network (and No. 2 carrier) in full Verizon-guise. With a fresh new branding scheme and that oh-so-coveted (you should be detecting a hint of sarcasm at this point) Verizon logo emblazoned on the face, the Palm Treo 755p is now being offered for about $150 more than what Sprint customers pay. At $400, the $50 rebate doesn’t do much for the Palm Treo 755p’s price point, but a good data plan should bring down the price-tag to about $300.

To bring you up to date on this whole Palm/Verizon mess. The Palm Treo 755p on Verizon’s network is the unnamed device that Palm blamed for their 2007 shortfalls. And, with the Treo 755p hitting the CDMA network at an outrageous price point and much later than expected, Verizon customers must be feeling somewhat burned by Big Red. Especially considering that the Verizon-branded Palm Treo 755p offers absolutely nothing over any other Treo 755p on the market.

Excuse us while we shake our heads in disappointment.