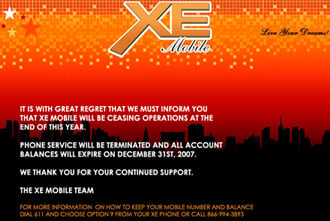 Following in the footsteps of larger MVNOs before it, XE Mobile has just announced that it will be turning off its AT&T-leased network on December 31. XE Mobile offered college students cheap prepaid plans on cheap GSM phones, but apparently didn’t get enough cash-strapped college-students to jump on-board their sinking ship.

We can’t say we’re going to miss another MVNO, nor can we say that we didn’t say this wouldn’t happen. But, it looks like the MVNO wave is crashing hard. We hope it was fun while it lastest. Nice to (kind of) know you, XE Mobile.