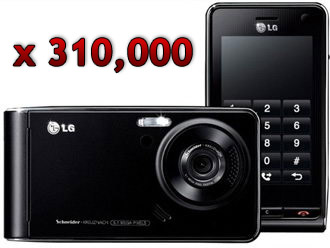 It seems LG has another winner with its Viewty model. According to the Korean company’s official release, they’ve been selling around 6,300 Viewtys per day in markets across Europe. And while that may not sound that impressive compared to some Nokia models’ sales, it’s worth mentioning this number exceeded the initial records of LG’s successful earlier models, LG Chocolate and LG Shine comparing with the same period.

Now, we doubt the Viewty can beat the “Chocolate numbers“, but LG is expecting the European-like success with their launch of the Viewty in other markets across Asia and Africa… Full release after the jump.

PRESS RELEASE – LG Electronics has announced that its LG Viewty featuring five-megapixel camera phone (model: LG-KU990) has recorded impressive sales performance of over 310,000 units since its introduction to the European market.

With its innovative functions and distinctive design, LG Viewty, the professional-level camera phone earned extensive media and consumer attention even before its launch. The high-tech phone has achieved even wider acclaim since entering markets across Europe including UK, France and Germany notching around 6,300 units daily. This number exceeded the initial records of LG’s successful earlier models, LG Chocolate and LG Shine comparing with the same period.

The secret behind the successful sales performance can be credited to the astounding blend of technology and features that LG has packed into this handset. An advanced, full-LCD touch screen complements a rich array of camera features allowing consumers to enjoy high quality image, editing and image-sharing. All of the rich features of LG Viewty surpassing those of any handset currently on the market have been designed to bring maximum benefit to consumers who place a priority on their viewing experience.

Stylish design also factors into the Viewty’s popularity, as LG has always placed a premium on design as proven through LG Chocolate and LG Shine. LG Viewty has now achieved a harmony of high technology and sensational style by winning the 2008 iF product design award.

“We are thrilled about the immense interest from consumers. In some countries, our product supply is even running low. This impressive result is attributable to the perfect balance between technology and design developed based on consumer insight,” said Dr. Skott Ahn, President & CEO of LG Electronics Mobile Communications Company. “LG Viewty’s success is a significant achievement for LG as it is the first product in a high-technology line of handset at LG Electronics. With the confidence gained from our brisk sales activity, we will continue to improve areas of both features and premium design.”

Sales of LG Viewty are expected to continuously grow throughout the world since it has currently launched into the Asian and Middle East markets and been spotlighted as the best Christmas gift item for packing a sleek handset together with a high-quality digital camera.

Chinese phone with 4 cameras helps people spy on others

Have no doubt about it -- the device on the image above just looks like a regular phone from China....