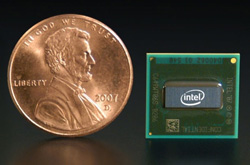 Apple and Intel. Once rivals, now the bestest of friends – or at least it appears that they’ve gotten all chummy. And, it looks like the partnership has grown even stronger. Apple has reportedly committed to using Intel’s 45nm Silverthorne mobile chipset in Apple’s next-gen device for 2008. We’ve heard that Apple was looking to Intel to power their next iPhone, and this latest news lines up perfectly with that speculation.

The Silverthorne processor is claimed to have the power of a second-gen Intel Pentium M processor with the power consumption of a mobile phone processor. And, with Intel’s push into the mobile space, Apple is expected to work with Intel’s Menlow Mobile Internet Device platform.

Could that mean we’ll see Apple defect from the Samsung’s processor stable and give Intel a chance to power the next-gen, 3G iPhone? Perhaps an Intel-powered Apple Newton? We know Intel’s Silverthorne and Mobile Internet Device platform are more than capable of handling a full-fledged UMPC device, we’ll just have to wait and see.

AT&T: Here are the best-selling ringtones of 2007

Wondering what your homies at AT&T are listening? To help you out and to get some media attention along the...