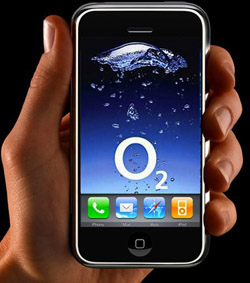 Turns out that O2’s claims of the iPhone being the fastest selling device in the carrier’s history wasn’t all marketing-talk. O2’s head honcho recently paid his Jobs-ness a visit in Cupertino, California to presumably give each other their “high-fives” over how well the iPhone is doing in the UK. Despite reports of slow-sales, O2’s Matthew Key told Steve Jobs that O2 should move around 200,000 iPhones by the end of January (we should note that other reports indicate that iPhones have been selling very well).

More importantly (especially for O2), Key told Jobs that the iPhone has spurred incredibly high data-usage rates on the UK network. With 60% of iPhone users clocking more than 25MB of data per month, O2’s data revenue has gone through the roof (compared with 1.8% of O2’s general subscriber base using 25MB of data every month).

With data-revenue the key money-source from O2’s iPhone customers, it’s pretty much a lock that O2 will be picking up the 3G iPhone when it launches next year.

Good for you, O2. Way to meet your iPhone sales goal.

We've seen our share of iPhone-advertisement spoofs. Some are funny, some are just lame. But, this one really stands out....