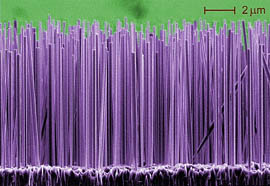 While wireless-charging solutions and hydrogen fuel cells are still on the horizon, Stanford researchers have just come across a breakthrough in battery technology that’s available today. We’d love to have our mobile phone charge while in our pocket, or have our fuel cells topped off at the nearest hydrogen charger, but alas, those technologies have yet to even come close to hitting the mainstream. For now we’ll have to deal with the best that current tech has to offer – the Lithium-Ion battery.

The engineering geeks at Stanford have come up with a way to extend the capacity of current Li-ION batteries by ten times. Repeat – that’s ten times longer battery life from the same battery!

The new tech promises to boost a cellphone’s 4 hour battery life to 40 hours of uptime – an incredible feat in any book. The research team leader, Yi Cui, has already filed a patent application and hope to get battery manufacturers to adopt his new technology.

Lithium-ION batteries are limited by how many ions can be stored on the battery’s anode, which is usually made of carbon. Cui has replaced the carbon anode with silicon to achieve the boost in capacity. His approach uses silicon stored in nanowire tubes that resist fracturing as the silicon swells and shrinks in proportion to the ion-load.

Let’s hope this tech hits the mainstream sooner than later. Who wouldn’t pay a couple more bucks for a a ten-fold increase in battery life?