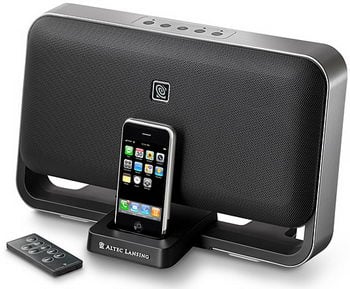 Altec Lansing T612 are the new speakers from the Plantronics-owned company that officially work with the iPhone and other new-generation iPod models. Unlike Altec’s other iPod-only speaker systems, the T612 is primarily made to work with Apple’s handset, hence it features incoming call support – allowing users to actually hear the iPhone ringing (music stops). Once the call is completed, the iPhone is re-docked in the T612 and the music resumes playing at the same song and place.

As for the specs, the T612 boasts “powerful neodymium speakers and XdB bass-enhancement technology,” as well as the standard auxiliary-in jack on the back for connection to older iPod models and other audio devices. In addition to the speaker, buyers also get a wireless remote for iPod song navigation functionality.

Altec Lansing T612 speakers will be available in February 2008 at Apple retailers for $199.95 (U.S. MSRP). In the meantime, you may want to see them live at Altec Lansing’s CES booth – South Hall 1, Booth #20913. Official release is available from here.

It's not just the Motorola Z10 that's officially announced -- it's also the ROKR E8 which we've already seen for...