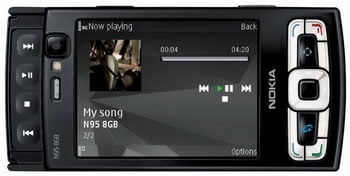 Finally, Nokia used CES as an opportunity to officially confirm what we already know — they will be launching their flagship N95 8GB Symbian S60 based smartphone to the U.S. market. The right HSDPA frequencies (850/1900 MHz) are there, and the device should hit Nokia flagship stores in New York and Chicago, as well as online e-tailers during this quarter.

Want one? Sure you do! Estimated retail price without any contract is $749. Or you could wait for AT&T to pick it up… We hope they will… Full release follows after the break.

A recent global study commissioned by Nokia, entitled ‘A Glimpse of the Next Episode’, predicts that by 2012, up to 25 percent of all entertainment will be created and consumed within peer communities as opposed to traditional media groups. With this trend dubbed by Nokia as ‘Circular Entertainment’, devices such as the Nokia N95 8GB, which allow the consumer to create, edit and upload content directly to the Internet, will be more important than ever as consumers personalize content and make it their own.

“Today’s savvy consumer wants an all in one device that enables them to customize and share content immediately with their social communities. The Nokia N95 8GB fills this void as one of the most advanced wireless devices currently on the market in North America,” said Bill Plummer, Vice President, Go-to-Market, Nokia Americas. “With the addition of HSDPA for ultra-fast connectivity, the Nokia N95 8GB delivers on the promise of a multimedia computer in one surprisingly small package.”

The Nokia N95 8GB comes with the advanced feature set expected from a state-of-the-art Nokia Nseries multimedia computer. The new Nokia N95 8GB offers a class-leading five megapixel camera with Carl Zeiss optics and autofocus, WLAN, and a full eight gigabytes of internal memory, allowing for storage of up to 20 hours of video or up to 6000 songs. Complete with captivating 3D graphics, the Nokia N95 8GB will also offer compatibility with the upcoming N-Gage games service. It is also a full-featured GPS device with assisted GPS (A-GPS) and a large map database covering more than 100 countries, including a number of US state maps preloaded. The Nokia N95 8GB will also support Nokia Share Online 3.0, which will be made available via Nokia Download! and will enable consumers to upload photos and videos with one click to Flickr or Vox, allowing them to quickly share content with their social communities.

Based on powerful Symbian S60 3rd Edition software, consumers can personalize their Nokia N95 8GB by choosing from a wide selection of advanced mobile applications, including games, navigation, entertainment, productivity and creativity. The Nokia N95 8GB comes out of the box ready to create, connect, consume and interact with some of the Internet’s most popular services including Yahoo! Search, Amazon’s MobiPocket Reader or Flickr. The device also features widget support which enables users to customize the online content they can receive quickly on their Nokia N95 8GB.

The N95 8GB multimedia computer has an estimated retail price of $749 and will start shipping to Nokia Nseries retailers across the United States, the Nokia flagship stores in New York and Chicago as well as online e-tailers during the first quarter of 2008.