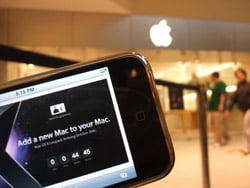 We already knew that any iPhone needing warranty or repair service from Apple should be restored to its factory state before giving it some hands-on time with an Apple “Genius.” We’re going to keep using putting “Genius” in quotes because we definitely don’t think they’re anything more than hired monkeys. Anyway, we digress.

Doug Rodriguez reportedly went in for warranty service with his factory-locked, non-jailbroken iPhone. He was summarily denied. His only wrong move? Installing a custom iPhone ringtone through a process that bypasses the iTunes ringtone installer. He used the little “renaming” trick that allows anyone to install ringtones onto their iPhone by tricking iTunes into thinking that the custom ringtone-file was created by iTunes itself.

Rodriguez’s iPhone started displaying the dreaded “Invalid SIM” message after a routine system-restart. He left his iPhone with Apple for service, and after a few days received word that they would not honor the iPhone warranty. Says Apple, “(we have) determined that (the iPhone) has been subjected to accidental damage or misuse, which is not covered by the warranty or an Apple service contract.”

Doug says that, “I’ve never dropped my iPhone, I’ve never exposed it to water.  I’ve never put third-party apps on it or hacked it.  It just stopped working and Apple apparently does not believe me,” adding “The ‘product specialist’ told me over the phone that it was determined that unauthorized software was installed on my iPhone and that’s why I’ve been getting the ‘Invalid SIM’ message.  The only thing I’ve ever done is back in September putting one custom ringtone on my iPhone via the “manual transfer” method. Nothing Else.”

The lesson? Always RESTORE your iPhone before taking it in for Apple-service. Unless you’d rather pay for the repairs out-of-pocket…

It was predicted to happen. The New Year was supposed to usher in a new wave of evil iPhone coders,...