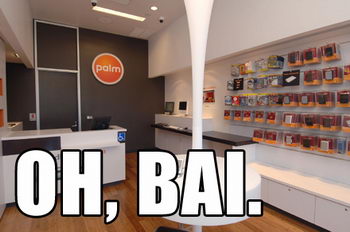 Palm has certainly known for better times. Back in the days when they’ve launched the first Treo, they were shining like no many companies have. Things are way more different nowadays. The Treo-maker faces competition from Nokia, Sony Ericsson and an array of Windows Mobile device makers. Not to forget Apple’s iPhone and the upcoming Android based smartphones. Plus, to make things even worse their next-gen OS has been delayed for a couple of times.

And now they are apparently shutting their stores. TreoCentral forum member is claiming Palm will be closing all but its airport-based retail locations by the end of this month. This goes beyond rumor, as other forum members have confirmed this, having previously checked in with their local stores…

What’s next Palm? C’mon guys, you can do better than that. Release the damn OS or ride the Google’s wave. Something’s gotta be done fast!

UPDATE: Palm confirmed it’s shutting its eight branded stores in California and 26 “stores within a store” at major metropolitan airports around the country. It will maintain the store within its own corporate headquarters in Sunnyvale, California. Article.