Flexible displays and devices are the future. Rollable e-ink newspapers, flexible displays, we’ll be seeing a lot of them in the coming years. And, following on that READIUS foldable mobile device from Polymer Vision, an older Motorola patent application regarding a flexible display/keyboard has surfaced. 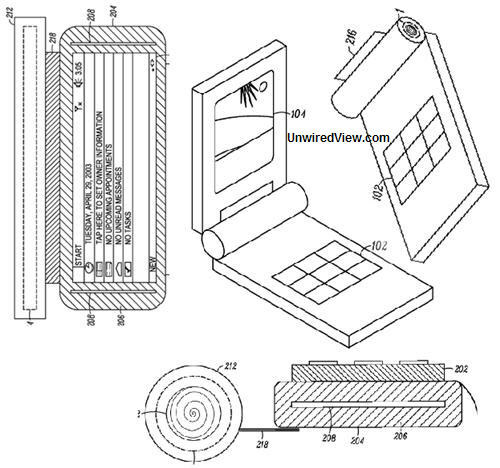 Motorola’s taking the whole “flexible” idea to the next level. Not only is the display flexible/rollable, the keyboard rolls up with display as well. Since a rollable display does little good when the keyboard is as stiff as the stick keeping Steve Ballmer’s backside nice and rigid, Motorola has devised a method whereby the keyboard portion of the device is filled with an electrorheological fluid (a fluid that becomes semi-solid when an electrical current is applied to it) – allowing it to fold up along with the display. When an electrical current is passed through the keyboard (presumably when the keyboard has been unrolled), the fluid materializes into a temporary keyboard. Stop the flow of electricity, and the keyboard reverts back to its fluidic state. Genius.

The flexible portion of the device will be housed in a rigid casing, but with the benefit of having a flexible display and keyboard, the casing need not be much bigger than a box of matches (in other words, really, really small).