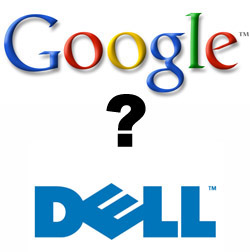 Partnerships between industry giants are a dime a dozen these days. The latest speculation involves Dell and Google getting cozy in preparation for a mobile phone launch at Mobile World Congress (formerly 3GSM) in Barcelona next month.

The speculation comes from “senior industry sources” but Google has denied any such rumors.

As you may remember, Google was rumored to be bringing a mobile phone to market as the Google Phone (GPhone/gPhone), but those rumors were quashed when Google announced their open-source mobile phone platform, Android. We’re not sure if this latest rumor is just a confused interpretation of Dell’s intention to introduce an Android-based handset in Barcelona, or if Google really is going to launch a GPhone in conjunction with Dell.

If anything, we’d think Dell would be introducing an Android handset next month.