Windows Mobile handsets (most, if not all) come with “stereo speakers” nowadays. The thinking is that you’ll be able to rock-out to your Windows Mobile smartphone without the need to don some cumbersome headphones (earbuds, earphones, whatever). The sad 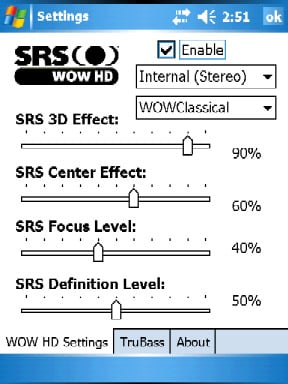 reality is that the stereo speakers on most WinMo devices are placed to close together to project any real sense of “stereo” in the audio-field. What you get is incredibly flat, mono-sounding music from your cellphone. And that’s the other thing, the music sounds flat because there’s not enough definition, bass, treble, etc.

Enter the SRS WOW audio-enhancing plugin. With this handy-dandy little plugin, you’ll be able to squeeze Hi(er)-Fi sound from your WM device. SRS WOW allows you to control things like the “loudness,” definition, focus, bass, and even the center channel. But, the best part feature of the SRS WOW plugin is that it allows you to adjust the “SRS 3D Effect” – which essentially tweaks your audio output to give the impression that your stereo speakers are further apart than they really are. This feature is commonly known as “stereo widening” or “stereo separation.” If you’ve ever messed around with the Nokia N95’s audio setting, you’ll know what we’re talking about here.

Imagine that, stereo-sounding audio from your stereo speaker. Just remember to change your audio setting when you use headphones – there’s a special setting for that.

SRS WOW won’t endow your WinMo handset with the same audio-prowess as the N95 (it’s got damn fine audio-performance, by the way), but hey, it’s better than the crap-audio you’re dealing with now.

Download the file, unarchive the CAB file, then install it directly from your Windows Mobile device. Reboot your device and you’ll find your SRS WOW plugin under Start / Settings / System / WOW HD Settings.

There's nothing worse than getting getting out-of-sync traffic information. Your navigation system re-routes you to avoid the traffic "slowdown," and...