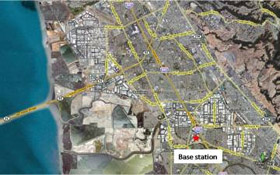 There’s nothing worse than getting getting out-of-sync traffic information. Your navigation system re-routes you to avoid the traffic “slowdown,” and it ends up taking longer than if you had just stayed on the highway.

The problem is rooted in the current traffic monitoring system that is currently in use in California – home to some of the most horrific traffic pile-ups in the country. You see, traffic flow is detected using fixed-position traffic-sensors (either video-based or inductive-magnetics embedded in the ground) and can  only provide reactive data. That is to say, you can only detect traffic flow through changes in average highway speeds.

Well, a group of 100 students at UC Berkeley want to make traffic flow detection a more accurate endeavor. They plan to trial a new system, dubbed Mobile Century, in which vehicles will be fitted with GPS-equipped mobile phones to serve as mobile traffic sensors. The Nokia N95 will be the handset of choice as these students drive all day between the cities of Ward and Fremont. And, the fleet of Nokia N95s will upload data to the Mobile Century servers every 3 seconds.

Mobile Century aims to test the viability of real-time traffic monitoring via cellphones. The students hope that the mobile-traffic-monitoring system will provide more accurate traffic data than current, fixed solutions.

Kudos to those crazy kids from UCB. There’s nothing like a group of college students to do something that state-government bureaucracy couldn’t pull off in a decade. Not that we have a problem with the way those municipal fat-cats are running things…

We'd be willing to bet that most iPhone owners out there that keep up to date with the iPhone-related posts...