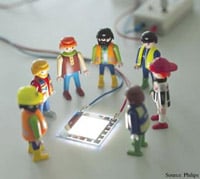 As mobile phones gets smaller and smaller (well, thinner, really), power consumption and battery life start to become a serious issue. Smaller form factors limit the practical size of the battery, especially when it’s competing for space with the rest of the cellphone’s components. While some researchers are concentrating on improving Li-Ion battery technology, others are focusing on the chipset-side of things.

Researchers at the Massachusetts Institute of Technology (MIT), in collaboration with bring a 10-fold increase in the energy-efficiency of mobile-chipsets. According to Anantha Chandrakasan, a team-researcher, the team achieved this feat by designing the chip to make use of 0.3 volts, compared to today’s typical chips drawing a full 1.0 volts of power. Reducing the power requirements of the new chip design required that “Memory and logic circuits have to be redesigned to operate at very low power supply voltages.”

The chip is only a proof of concept at this point, but this complete system-on-chip solution could see commercial application “in five years, maybe even sooner, in a number of exciting areas,” Chandrakasan says. Manufacturing variability and defects need to be overcome before the chip can hit the market – since any variability in chip-construction is exaggerated with these lower power-requirements.

Bring on the super-long lasting lithium-ion batteries and super low-power chipsets. We could very well see some incredible battery performance in the near future. As mobile phones get smaller, we could actually see battery-life/uptime actually increase. For the meantime, there’s always that fuel-cell option.

Is this a sign of things to come? Following on luxury MVNO Voce's abrupt (and unethical) bankruptcy, Helio has just...