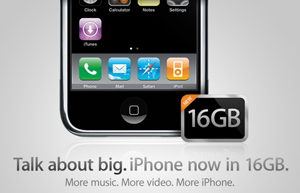 That’s it. I never thought I’d say this, but this is the first time that I sincerely feel like getting rid of my iPhone 8GB. It’s just not as appealing as it once was.

Calm down. The only reason I say this is because my iPhone 8GB is no longer the big-kid on the iPhone-block. You see, Apple has just updated their iPhone (and iPod Touch) lineup to include a new 16GB version of the iPhone. That means we’re going back to the two-tier iPhone system that we saw with the 4GB and 8GB iPhones.