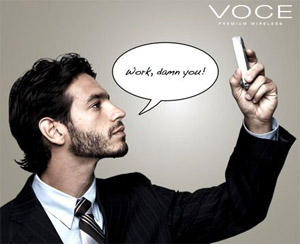 By now it’s clear that the most unethical MVNO in history has shuttered its windows and boarded-up its doors, leaving its customer literally in the wireless-dark. Voce, the Beverly Hills-based MVNO has gone belly-up, but what happened exactly?

Well, on the surface, it seems that all those billboards that Voce paid for didn’t yield any real returns. But, it goes deeper than that.

Japan-based Faith Inc. started Voce by leasing network time from AT&T. Steve Stanford, an early Amp’d principle (we all know how well that venture fared), was named the CEO of Voce. The premium/luxury MVNO wrapped network testing in November 2005 without much fanfare and marketed itself as the high-end carrier for customers that demand more personalized service from their wireless carrier. There was talk about Voce launching with a $1,500 setup fee and a $500 recurring monthly charge. For that money, Voce offered concierge service, live directory assistance, personalized service, and a new high-end phone every year (for free)- things that they had hoped would bring in higher-end clientèle. Voce launched in early 2006 in New York and LA with a $1,000 initial setup fee and $400 a month for unlimited minutes.

Soon thereafter, Voce was bought out by one of Faith Inc’s founders. This, folks, is where things started to go downhill.

By October 2006, Voce halved its prices – requiring a $500 initial setup fee and $200 a month. Clearly a sign of struggle. Voce’s service prices were falling like Enron-stock.

The new Voce owner had invested his own personal finances into the troubled company to keep it afloat – presumably helping to fund their advertising campaign in an effort to attract more customers, and making sure daily operations would continue. Voce changed its pricing structure – nixing the initial setup fee and charging $118 a month for 2,000 minutes and 5MB of data. The yearly mobile phone upgrade program was also eliminated – no more free phones for Voce customers.

Voce was transferred in a no-cash transaction to Chicago-based investment firm SunCal Midwest (aka SunCal Funds), after which point Voce employees stopped getting paychecks. It seems that the company had been struggling to keep their operations above water since SunCal Funds took control. It was only a matter of time before Voce could no longer tread water – drowning in the mess that they had created.

Voce still has not officially commented on their service shutdown, and their homepage is still running strong. You’d think these guys were still in business. The webs are ablaze with angry Voce customers, so its safe to assume that the MVNO is offline. It would be nice if the Voce guys would speak on the issue.

Now, there’s a class action lawsuit against Voce. People apparently don’t like to be cut off from their wireless network without warning or customer service. The website went live this past weekend and gives burned Voce customers a heads-up on how to get your wireless number ported to other carrier.

And, that is how the most expensive MVNO went down the drain. If you’ve been burned by Voce, let us know. And, more importantly, go to the Voce Class Action website.