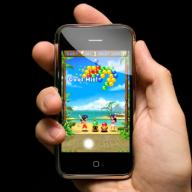 It seems rumors were correct. Now when SDK is out, Gameloft started to “create a strong line-up for 2008” and announced it will bring over 15 titles to the iPhone. At this stage, we don’t know which titles they’re talking about nor when will they appear. However, something tells us the release of Gameloft’s first games will coincide with the iPhone firmware version 2.0 in June. In the mean time, here are the words of Gameloft’s president, Michel Guillemot:

“The iPhone gaming environment opens a new era in mobile gaming and is exactly what we’ve been waiting for. The Apple iPhone has changed the way consumers perceive and interact with their mobile phones, and the release of the SDK is a tremendous opportunity for Gameloft to apply its creative and innovative approach to mobile gaming. Due to our investment in creating one of the most advanced and creative development studios to date, we are ideally positioned today to seamlessly integrate new opportunities and quickly produce games that are as evolutionary as they are enjoyable.”

June seems so far, doesn’t it?