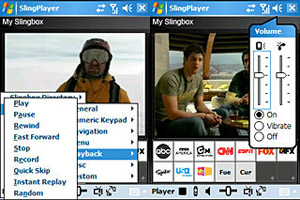 Sling will also be optimizing their Nokia N95 8GB client and has plans to bring the SlingPlayer Mobile to UIQ.

Most interesting is Sling’s mention of the possibility of bringing SlingPlayer Mobile to the iPhone. We’ve heard rumblings of SlingPlayer coming to the iPhone, but this announcement makes the possibility all the more credible. Now, streaming a SlingBox’s feed over an EDGE network is possible (the video stream is automatically adjusted depending on the available bandwidth), but it would be an injustice to the iPhone’s beautiful display to watch TV in low-res. Of course, the more pressing problem is Sling’s use of a WMV video feed instead of the H.264 encoding that iPhones love so much. Let’s hope both those problems get worked out soon.
Hey, Sling, give us iPhone owners any kind of Sling-support and we’ll be happy. We’ll deal with low-res TV feeds for now – until Apple gets real with the 3G iPhone, that is.

For better or worse, Motorola is lopping off executive-heads like this was Marie Antoinette's France. Following the exodus of Motorola's...