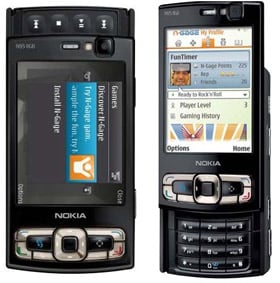 A little late to the party, aren’t we, Nokia? Well, better late than never, as they say.

Nokia has just gone officially official with the Nokia N95 8GB NAM. For those of you that weren’t already aware that Nokia’s flagship N-series device was ready to rock your world with North American-friendly 3G frequencies and that badass 5 megapixel, Carl Zeiss-fitted camera, Nokia has announced the N95 8GB NAM’s availability at Nokia Stores and online retailers for $749.

If you haven’t yet picked up the sleek-black, GPS-equipped Nokia N95 8GB when it was made available a couple weeks ago, then now’s the perfect time to get jiggy with 8GB’s of multimedia love. Give in to that 2.8-inch display, GPS, and 850/1900Mhz HSDPA radio and grab your own Nokia N05 8GB NAM at “Nokia Nseries retailers across the United States, such as the Nokia Flagship stores in New York City and Chicago, as well as many online e-tailers.”