Sprint isn’t doing so well as a traditional voice-carrier amidst its more popular competition. So, the struggling network operator is re-focusing its resources on the data-side of mobile communications. 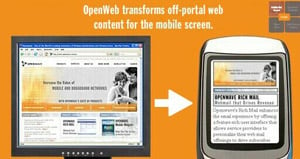 web-content. The fake internet that’s served up with those crappy, bundled WAP browsers is no longer acceptable to the informed consumer. And, as such, Sprint has announced that they will be bringing a more desktop-like web-browsing experience to all data-capable handsets in its lineup. In partnership with OpenWave, Sprint will be pushing the OpenWeb content adaptation platform (PDF link) to all compatible handsets, free of charge.

Through the use of proxy-servers, OpenWeb should allow web-friendly Sprint handsets to surf the web with webpages formatted in easy-to-read layouts that mimics the look and feel of desktop browsing – no matter the processing and memory limitations of a particular handset. The OpenWeb platform intercepts all website requests, formats them for the mobile phone, and sends an optimized version of the website to then handset.

Sprint users should see the OpenWave OpenWeb implementation start to roll out in coming weeks. We’re sure Palm Treo and Centro fans are going to have a field day with this one. Let’s hope Sprint’s data-side push will culminate in a successful WiMAX/XOHM network launch.

What that, you say? Verizon Wireless will be opening their network to "any app, any device?" Surely you jest. Verizon...