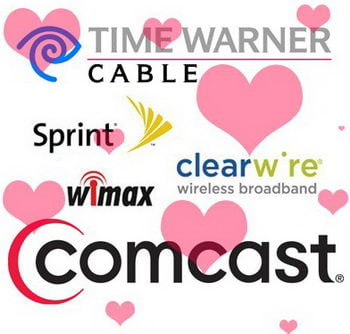 Rumor on the street is that Time Warner Cable and Comcast are in talks with Sprint and Clearwire to help them in their WiMAX plans. The idea seems to compete with the recent FCC auction winners, AT&T and Verizon, in voice and data services. That would certainly explain why the cable companies weren’t interesting in acquiring the new spectrum…

Anyway, according to a report in the Wall Street Journal, the “WiMAX group” is working round to clock to sign the deal just in time for the CTIA, which starts within less than a week. Moreover, apparently Google and Intel may also jump into the story giving the partners additional credibility and more importantly, an extra cash needed for the nationwide infrastructure.

Again, we see a tiny problem. Even if they agree and announce something for the CTIA, we won’t be convinced till April 2nd. Google cooperating with the cable companies sounds like a perfect April Fools’ joke, doesn’t it? 😉

VCs bullish on WiMAX in Russia?

There's no surprise in a fact that a large country like Russia is looking into wireless technologies like WiMAX. On...