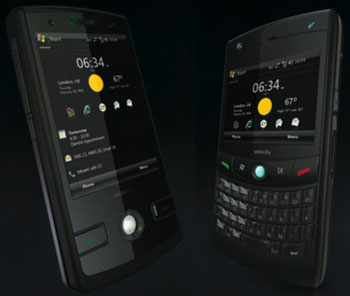 Ladies and gents, we have a new player in the smartphone market arena. It’s called Velocity Mobile and is a result of a collaboration between one of the world’s largest notebook computer manufacturers (Inventec) and a team of veteran wireless designers and engineers. They are at the CTIA in Las Vegas, presenting their first devices – Velocity 103 and Velocity 111.

Both devices look pretty cool, run the latest version of Microsoft’s mobile OS (Windows Mobile 6.1), and both sport such features as HSDPA/HSUPA support, Bluetooth 2.0, WiFi, GPS, two cameras (2 megapixel for taking photos and a VGA for video calls), TV/VGA out, 256MB ROM / 128MB RAM, and a microSD expansion slot. The difference is that the former model (Velocity 103) comes with the VGA (640×480), while the latter has only a QVGA (320×240) touchscreen, but also boasts the full QWERTY keyboard and BlackBerry-ish look and feel.

All in all – we love them! Not that similar devices are not already available on the market — rather it’s the fact they are a new company which announced two high-end devices right from the start, giving us hope we’ll see them releasing even more powerful smartphones in the near future.

Finally, let’s talk about the availability. The Velocity 103 will be available in Q2 2008, while the Velocity 111 fans will have to wait for a quarter more in order to grab the QWERTY keyboard equipped device. More information is available on Velocity Mobile’s website, and the official release is here.

The wait is (almost) over. Just as we expected, Nokia N810 WiMAX has been announced from the CTIA floor. However,...