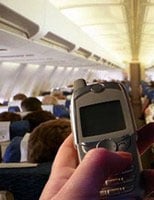 European jetsetters just got another step closer to getting their cellphone-calling fix while strapped into that airplane seat at cruising altitude. The European Commission has just approved the use of mobile phones in airplanes over European airspace. Following on the UK’s OfCom announcement that in-flight calling is good to go in Great Britain, the executive branch of the European Union has given their blessing to wireless in-flight calls.

The European Commission’s commissioner Viviane Reding warned that while airlines will have the option of providing whatever in-cabin wireless services they want to offer, they had better “keep the cost of calls made on planes at a reasonable level.” That is, unless the carriers want to feel the wrath of the Reding.

Of course, the European Aviation Safety Agency (EASA) still needs to green-light the hardware that will allow all these high-flying mobile phone calls before in-flight cellphone calling becomes a commercially-viable reality. But, with OfCom and the EC on board with the idea of chatting up friends and loved ones while high in the sky, the EASA approval seems to be a trivial obstacle.

Feeling the all-white HTC Touch but can't get away from Verizon's CDMA network? Well, you're in luck. The white-colored HTC...