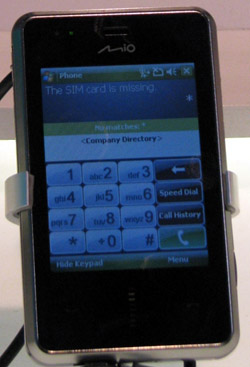 We don’t know Mitac for their impressive industrial design, but that looks about to change. The Mitac Mio DigiWalker Lovebird handset made an appearance at the Microsoft booth at CTIA and the keen eyes over at msmobiles caught it on film.

Mitac set out to make a sleek and slim Windows Mobile smartphone, and it they’ve done just that with the Mio Lovebird. With quad-band (850/900/1800/1900Mhz) GSM/EDGE, GPS/AGPS, 320×240 resolution touchscreen, 64MB RAM/2GB ROM – all powered by a Samsung processor clocked at 400Mhz – the Windows Mobile 6.1 Professional-based smartphone’s spec-sheet is impressive. Despite the lack of 3G, the Lovebird looks like it should make a small splash in the mobile space.

“The Mio DigiWalker Lovebird is an ultra-slim bar type GPS/PDA phone designed for consumers who want all-in-one capabilities for their travels. It is also a communications device functioning as a mobile phone which is targeted for professionals,” according to Mitac. The DigiWalker Mio Lovebird is slated for an August 2008 launch date. If only it had some 3G capabilities…

Raised Braille-bumps on handset keypads are good for dialing a phone number and other simple tasks, but it can be...