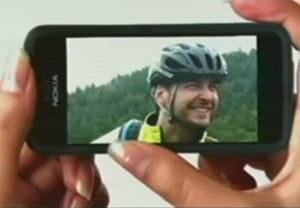 The Finnish mobile phone giant is not about to let the iPhone take any of its dominant market away from Espoo. With the iconic iPhone redefining the user experience in mobile phones, Nokia has been toiling away with a touch-based competitor to the iPhone. With S60 Touch finally getting the touchscreen treatment that the Symbian platform was initially designed for, Nokia’s on its way to pushing an all-touch device out its factory doors soon (well, not out of Bochum).

At the Evans Data Developer Relations Conference in Redwood City, CA., Nokia showed off their iPhone fighting Nokia Tube. The “Tube” looks a lot like the iPhone, but then any mobile phone (mobile device) with a full-body touchscreen and a minimal bezel looks like the iPhone.

Nokia showed graphical UI elements and demonstrated movie playback at the event. The Nokia “Tube” prototype still looks like the prototype we saw in November 2007. Nokia Executive VP said that ,”If there is something good in the world then we copy with pride,” and it looks like they’re holding to the iPhone-esque design.

The Nokia Tube will feature direct video uploading and support for Java, both things that the current iPhone does not offer. This could give Nokia a hand up on the current iPhone, but it remains to be seen how the S60 Touch OS will fare against the iPhone OS.

As far as sales go, Nokia’s dominance in the market and the Tube’s features are expected to out-class the iPhone. Forum Nokia VP Tom Libretto, derided Apple with the assertion that, while Apple has shipped 4-5 million iPhones since launch, “We’ve done that [sales volume] since we’ve had dinner on Friday.” To be fair, the sales figures for the world’s largest mobile phone manufacturer are largely due to sales in the low-end (and Nokia’s device portfolio is extensive, to say the least). It should be interesting to see how Nokia Tube sales fare against Apple iPhone sales, especially once the 3G iPhone goes live.

No release date has been mentioned for the Nokia Tube.

Having a hard time "hearing me now" inside a building, especially your home? Verizon Wireless has your back. The No....