In a country that hasn’t even seen the official launch of the iPhone, more than two-thirds of the Chinese population is aware of the iPhone. There are so many iPhone clones coming out of Chinese factories, it’s almost impossible not to ignore the counterfeit side of things. Perhaps the prevalence of China-made iPhone copies has helped make the iPhone an icon. 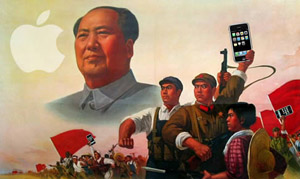 Pearl Research has found that, when asked about the iPhone, a full 68% of Chinese are aware of the iPhone. The study was conducted with 450 online participants and 24 in-depth interviews. Not too surprisingly, female respondents noted the iPhone’s design and “hot” factor as reasons to buy the device, while males were more likely to cite the utility of the iPhone as a big draw.

But, unlike other iPhone markets, the study found that potential iPhone users in China are less likely to hop on the highly restrictive Chinese information superhighway. High data costs are cited as reasons that China’s iPhone hopefuls are a lot less likely to surf the heavily Chinese-government censored internet.

With 88% of iPod owners interested in the iPhone, Apple would do well to crack the Chinese market sooner rather than later. Although, the current price of the iPhone is a significant barrier to entry in China.

Mitac Mio DigiWalker Lovebird does Windows Mobile 6.1 and GPS on the slim – specs and launch date

We don't know Mitac for their impressive industrial design, but that looks about to change. The Mitac Mio DigiWalker Lovebird...