Well lookey what we have here. Hot on the heels of the Nokia Tube demonstration that showed off Espoo’s touchscreen-based competitor to the multi-touch iPhone, here are some more details on the Nokia Tube.

Symbian-freak managed to score a live pic of the Nokia Tube in the wild. The S60 Touch-based handset from Nokia looks a bit awkward compared to the Apple iPhone, but then style and flair are Apple’s forte. And, keep in mind that image is horribly sub-par and that the Nokia Tube is likely still a prototype and will benefit from further refinement from Nokia’s design-heads. 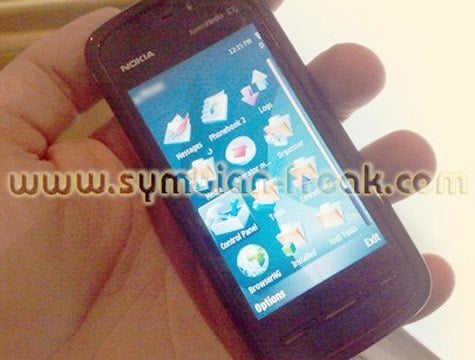 Apparently, the Nokia Tube will not be launched as a Nokia flagship handset. A higher-end touchscreen mobile phone based on the S60 Touch OS will be shipped “shortly after” the launch of the Nokia Tube.

Dusan managed to score some specs for the Nokia Tube, and he let me run with it. The Nokia Tube should be shipped as the Nokia 5800 Tube and will sport a 3.2 megapixel camera with autofocus. A 3.2-inch touchscreen display with 16 Million colors will go up against the iPhone’s 3.5-inch multi-touch display. To handle communications duties, there’s a quad-band (850/900/1800/1900Mhz) GSM/EDGE radio with 3G UMTS/HSDPA, Bluetooth 2.0, WiFi, and some GPS thrown-in for good measure. There’s also a 3.5mm headphone jack and TV-out port on the Nokia 5800 Tube. And, just like the updated N82, the Nokia 5800 Tube will support geo-tagging of pics – a nicety allowed by the built-in GPS receiver. Expect all this techno-gadgetry at the end of 2008.

Now, it remains to be seen just how well Nokia’s first S60 Touch OS iteration will fare against the incumbent multi-touch OS on the Apple iPhone. Past demonstrations of S60 Touch have been a bit disappointing, but Nokia has stuffed the Nokia 5800 Tube with all the technological goodies that I’ve come to expect from the Finns – will the built-in GPS, haptic feedback, and 3G be enough to overtake the iPhone? Probably.

But then again, the 3G iPhone is believed to be launching well ahead of the Nokia 5800 Tube’s year-end launch window. I can’t wait to see the Nokia 5800 Tube hit the interwebs with some live, in-hand demos. Stay tuned for the latest on the Nokia Tube.

Keep reading for the spec-sheet breakdown.

[Update]
The “5800” model designation makes sense for an XpressMusic device, and the Nokia 5800 Tube shows an “XpressMedia” designation on the upper right of the device.

We've seen our fair share of watches masquerading as mobile phones in our time. It's pretty safe to say that...