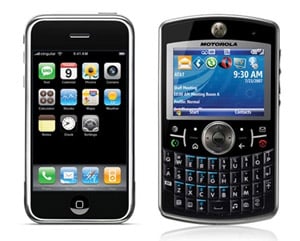 What’s this? Another usability study? A recent study found that the heralded Apple iPhone takes a back seat to the Motorola Q9h in SMS text messaging prowess, among other things. Good Housekeeping Research Institute took 11 QWERTY keyboard-packed handsets with subsidized (after 2-year contract) retail prices of $300 or less and pit them against the $400 iPhone in a test of text messaging ease, speed of delivery, battery life, voice quality, and ease of placing a voice call.

The results? Well, not unexpectedly, the T-Mobile BlackBerry Curve scored top billing as the fastest to send and receive SMS text messages. The battery life of the BlackBerry Curve was also noted as top notch. And, the iPhone took a back seat, in terms of text messaging ease, to the Windows Mobile 6.0-powered Motorola Q9h. The study noted that users liked the Moto Q9h’s large, easy to read display and voice quality.

I’m going to have to disagree (surprise, right?) with the study. The iPhone’s SMS text messaging application is so much easier to access and start-up (not to mention actually tracking past text messages) than its Windows Mobile 6.0 counterpart – keep in mind, WM6.1 improves the UI and makes text messaging even easier. In terms of hardware, the on-screen keyboard on the iPhone allows for much faster typing speeds than the Motorola Q9h. Granted, the iPhone’s keyboard takes some getting used to, but thanks to the on-the-fly error correction I think the iPhone’s keyboard allows for faster text input. I’ve said it before and I’ll say it again – I can type faster on the iPhone than any other QWERTY-toting handset, and I’m sure I’m not alone.

Still, the keyboard on the Motorola Q9h does have great tactile feedback and the keys are well laid out. If only the Q9h had the web-browsing and user interface prowess of the Apple iPhone…

Video: iPhone like browsing, now on your Windows Mobile device

Touch screen Windows Mobile users, may I have your attention please! I'm sure you've seen plenty of videos of the...