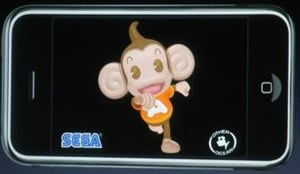 The iPhone as a gaming platform. It’s inevitable. And, with the AppStore launching in a couple short months, the success of mobile games on the iPhone will be largely left to how much gaming development is available for the iPhone.

One of the few games demonstrated at the iPhone SDK launch was Spore. But, games like Spore aren’t designed for a casual gaming experience. Gameplay evolves and builds on previous sessions. On the other hand, Sega’s Super Monkey Ball, the other game that was shown at the iPhone SDK launch, is the embodiment of casual iPhone gaming. Pick up the iPhone, fire up a new game session, and quit when you’re bored – casual gaming is easy and fun.

Ethan Einhorn sat down with GameCyte to talk about the development of Super Monkey Ball for the iPhone. Einhorn explains that the casual gaming experience on the iPhone will be much like that on the Wii and gaming performance that’s on par with other handheld gaming devices. Sega and Apple apparently have a great working relationship, so we can probably look forward to more iPhone games from Sega. That’s great news and all, but let’s just hope that other iPhone game developers are pushing their iPhone games just as hard.

Following fellow European iPhone counterpart T-Mobile's move to subsidize the iPhone 8GB when purchased with a a qualifying rate plan,...