Remember those mysterious HTC smartphones that made an appearance in the picture that Stefan found? Right, well it seems that those two HTC Kaisers (HTC TyTn II’s), HTC Touch, HTC Touch Cruise,  and HTC P3470 were joined by what could be the HTC Dream. Take a look at the picture again. You see that QWERTY-sliding handset with that beautiful, large display? Well, word has it that it’s the rumored HTC Dream that could be unveiled next month. 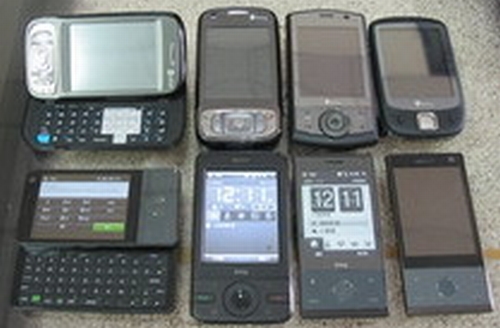 The huge display and QWERTY keyboard make the pictured HTC device a good candidate for the not-yet-released HTC Dream. But, closer inspection shows the unknown HTC handset in the lower-left corner running Windows Mobile (the menu bar and “Start” key are clearly visible in the picture). Could the handset be the HTC Dream running Windows Mobile in place of Android during its testing phase? Maybe, maybe not.

As for the other two unknown devices flanking the HTC P3470 in the lower-right corner of the picture, turns out that they’re T-Mobile MDA Compact IV’s. The 7.2Mbps HSDPA-capable handsets are a T-Mobile exclusive in Europe and sport GPS, Wi-Fi, and 4GB of storage.

Will HTC drop the Dream-bomb on us May 6th with the handset pictured here?