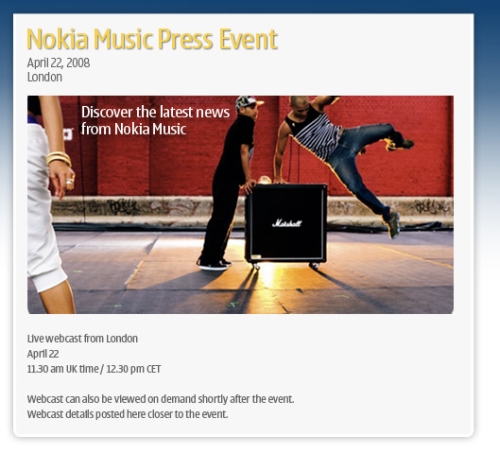 The Nokia 5320 and 5220 have just been announced, one S60 and one S40 powered, more than an hour after the live webcast was supposed to start. I love to include ultra high resolution images in my post when new devices are announced, read on after the jump.

Now the 5320 will be 220 EUR and for that amount of money you’re getting quad band GSM/EDGE and dual band 3.6 Mbps HSDPA. There will be one version with 850/2100 MHz HSPDA and another with 900/2100 MHz HSDPA. You get a 2 inch 240 x 320 resolution display with 16 million colors. No word as to the version of S60 this device runs, but I wouldn’t hesitate to predict it is S60 3rd Edition Feature Pack 2. The 5320 has S60 3rd Edition Feature Pack 2, thanks Jukka. This 90 gram device is 108 x 46 x 15 mm and has a 3.5 mm headphone jack with a dedicated HiFi audio chip that should give you better playback quality and enable a whopping 24 hours of listening time, which is bold claim since the 5320 only has a 890 mAh battery. With microSDHC support you can shove an 8 GB card in here and higher capacities once they become available. This is the first S60 device to support high speed USB 2.0 transfer, I’ll have to get one in the lab to see just how fast that really is, I always recommend getting a dedicated card reader to save yourself the hassle of waiting for the progress bar to finish. 2 megapixel camera, Bluetooth A2DP support and something called “Say and Play” where you can say an artist or song name and the device will start playing it are also included. Data sheet here: PDF. More images here.

3UK customers are going to being offered the "Vuzix iWear AV920 3D headsets" from this month. This is apparently the...