The age of T-Mobile’s 3G network is nigh! After months and months of delays and waiting on Uncle Sam to vacate his behind off T-Mobile’s AWS 3G spectrum, it looks like the No. 4 US wireless carrier is poised to go live with their 3G network. Come tomorrow, May 1, T-Mobile USA will light off its 1700Mhz 3G network in New York. 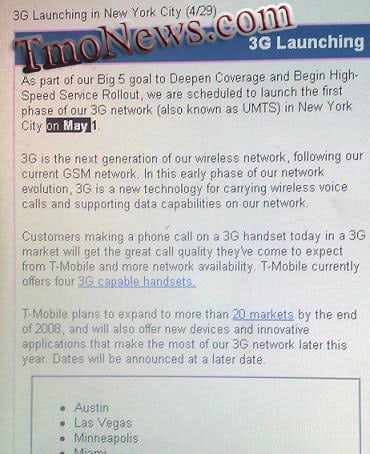 While the initial 3G network rollout from T-Mobile will be limited to those lucky T-Mobile customers in New York, we should see some 20 other major US markets welcoming T-Mobile’s new UMTS spectrum quite soon. Expect T-Mobile’s 3G network in Los Angeles, Las Vegas, Miami, Houston, San Francisco, and New Jersey.

T-Mobile USA currently has 4 handsets in the wild capable of sucking down that sweet, sweet 3G data, so you won’t be left wanting for a T-Mobile 3G compatible handset once the network launches.

Keep reading for a full list of cities to be covered by T-Mo’s 3G network.

Sure, there are scattered reports of Verizon already offering the update to LG's popular LG VX9900 enV, but the handset...