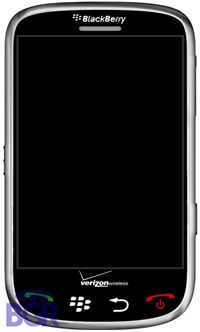 Rumors, being what they are, should be taken with a grain of salt. That said, the newest rumor to leak out of Waterloo indicates that RIM is brewing up a serious all-touchscreen contender to the iPhone. The rumored handset, known as the RIM BlackBerry 9500 “Thunder” is said to release as a Verizon Wireless/Vodafone exclusive – possibly making up for Verizon’s decision to pass on the Apple iPhone (Steve Jobs’s first choice for the iPhone’s exclusive network operator).

The rumors of an all touchscreen BlackBerry falls in line with previous rumors that RIM was working on a touchscreen-based iPhone-killer, known to RIM engineers as the BlackBerry “AK” (Apple Killer). Could the new BlackBerry 9500 Thunder be stealing the newly announced Blackberry 9000 Bold’s, well, thunder as the commercial incarnation of the Blackberry AK?

It would make sense for RIM to finally bring touchscreen interface to the BlackBerry lineup, and we have a hunch that the BlackBerry AK will launch as the BlackBerry 9500 Thunder. But, like it says above – take all this with a grain of salt.

In a report from LeMatin.ch that has Apple bringing the iPhone to Switzerland through Swisscom this summer, there is speculation...