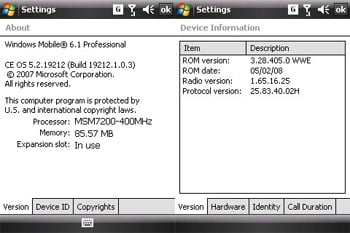 This is still unofficial, but the update file (available from here) makes us think HTC will be releasing the Windows Mobile 6.1 update for HTC TyTN II in the near future. Or at least we hope to see them releasing the new firmwares for all TyTN II flavors, Kaiser and Tilt included, in the coming days.

Expect all the nuts and bolts of the updated Microsoft’s mobile OS you’ve been craving for — including not-that-noticeable “video performance” update (guess that’s the graphics driver update we’ve covered previously), “Getting Started” wizard, threaded SMS, improved battery life, and more. Overall, according to MoDaCo forums member Paul, the updated device feels “a lot slicker in use.”

Word of caution – we do not advise updating your firmware prior to the official release. Unless you really know what you’re doing, it’s wiser to wait for the firmware upgrade from HTC.

Philips don't give up on the mobile phone market. Aside from powerful batteries, we don't see them adding some (if...